This proposal is a continuation of the Dash Marketing Hub, an official fork of the Dash Incubator, focused on grassroots marketing and promotion of Dash, and on community energizing/engagement.

This cycle we are continuing with the more decentralized leadership which replaced the initial single Proposal Owner role with the Director roles. Hub Directors at this time are myself (TheDesertLynx), Kanuuker, and Pozo, with one (myself) acting as a Treasurer (no change since last cycle). Full details on governance particulars can be found in our Rules document, with no changes since last cycle and changes since the previous cycle remaining highlighted in yellow.

Current Admins (in addition to the Directors who also act as Admins) remain unchanged and are GreekNick, Rion, whysmh4dash, and VVALTER_DASH.

Below is a breakdown of our spending this past cycle: 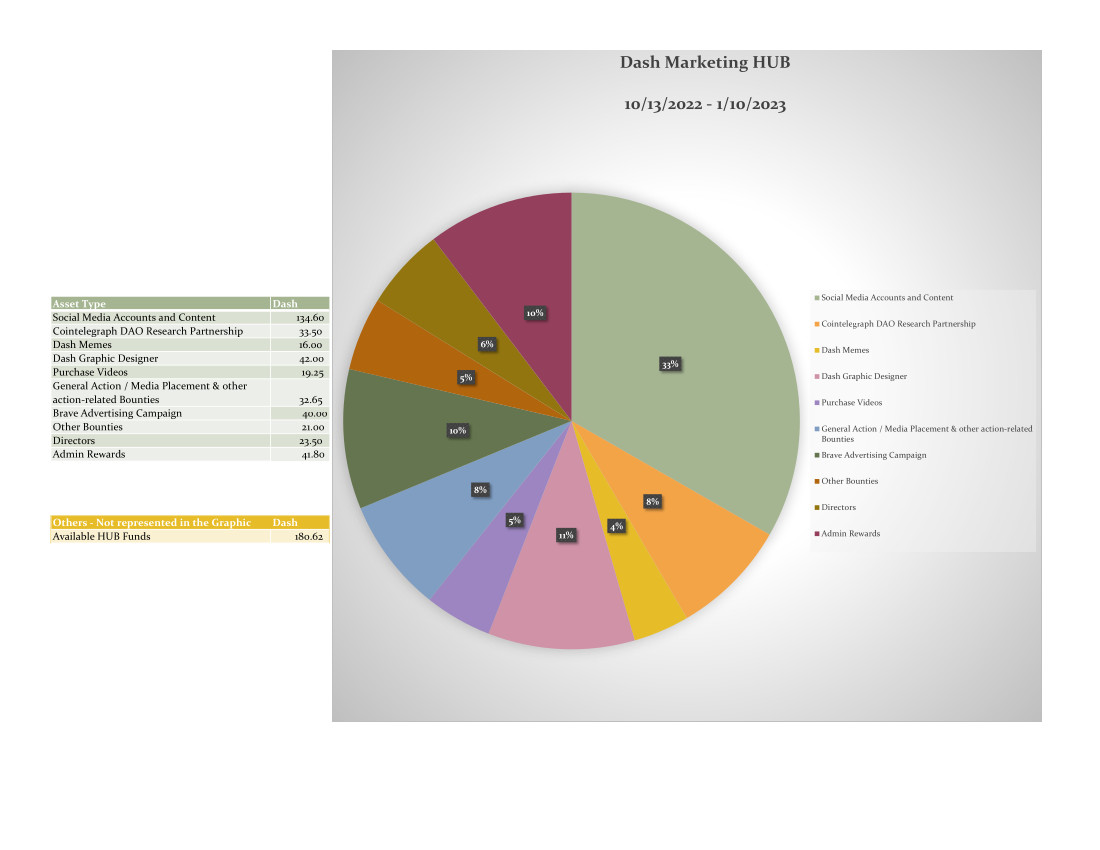 This past cycle we have continued with our reduced basic ask while focusing on wrapping up two larger projects, the Cointelegraph DAO Report partnership and our initial Brave browser advertisement campaign. The Cointelegraph Research partnership has concluded as of December. Here is the metrics report, updated at the submission of this proposal.

Our initial advertisement campaign with Brave Browser highlighting the all-in-one wallet is currently underway, and is expected to wrap up at the end of the month. We will of course provide a more detailed report at that time, but so far the campaign has generated approximately 60,000 clicks and is comfortably above Brave’s benchmarks for click-through rates. In particular, our rate of views who spend over 10 seconds on the page is nearly double the rate of Brave’s benchmarks. We feel confident that we now have a great mechanism for reaching new users, and if we successfully target advertisements on Dash’s best products this year, we can create a positive cycle of user growth.

(Note: The Cointelegraph and Brave campaigns are reported on as part of this proposal because they were initiated before we moved to a more modular approach. Future similar campaigns will be reported on with their separate proposals.)

Our merchant bounty, which provides the incentive for both onboarding new merchants to Dash, and adding existing merchants to available merchant listings, in particular the listing inside the official Dash mobile wallet, has continued to see growth. As the merchant listing in the wallet in particular grows, we feel that this grows Dash’s value proposition as money while waiting for additional tools such as DashDirect’s card program to be developed. This also allows us to offer merchants the attractive prospect of being listed in a wallet app with over a half-million downloads if they accept Dash.

Please note that approximately 15.75 Dash of our remaining reserve is earmarked for the completion of the ongoing Brave browser advertisement campaign.

As promised, we have moved to a more modular approach with segmented asks and separate proposals under separate responsibility. We feel that this not only allows MNOs to have more granularity in which projects they choose to approve, but this also focuses accountability for results more directly. We hope this new approach will prove beneficial and look forward to constantly evolving our approach to best suit the network’s needs.

This quarter the base monthly funding ask remains at 100 DASH. This represents roughly 2% of the total Dash treasury. This amount represents a similar purchasing power amount of last cycle, and as such we have continued to make due with less purchasing power, and save larger asks for larger projects.

All operations of the Hub funded by this proposal are subject to the latest Rules published here:
https://docs.google.com/document/d/1bpTl-7TuzYPAy7_kGPNpHZo3biLxq6oE5tOjPv-Z-oo/edit?usp=sharing

With regards to the other Dash Marketing Hub proposal i think it is more important that there is a renewed focus on getting Dash back into the daily Google search results and the only way i see this happening is by creating a lot more news articles about Dash and spreading those to as many crypto focused websites as possible. I have no problem funding (through the budget) for paid Dash news content, in order to get Dash visible again in the Google search results (it is not just Google search, it is also Bing and other search engines that Dash has been losing visibility on, due to the lack of news reporting on Dash)

We also have to start taking into account that the crypto users are getting increasingly younger, so we also need to do marketing and promotion of Dash on those channels / websites that they use. Which means we may need to do some market orientation, to see where they get their crypto information from these days.

Reply
quantumexplorer 2 points,15 days ago
You have my continued support. Thank you for this work.
Reply
kanuuker 1 point,15 days ago
Thank you very much! Your support means a lot to us.
Reply