Quick SXSW proposal update: We have officially secured a sponsorship for the SXSW Accelerator. We have also finalized our team. It includes  the CEO of a large insurance and financial services company (more to come on this),  a very active Philanthropist in Austin, the CTO of an Inc 500 fastest growing company,  the founder of a large marketing company,  a very prominent developer who has  made contributions to the Angular framework, and a startup founder. We are currently securing all the gear and materials we will be using at the conference, and working on our full page ad. We have also collaborated with feedbands and will be directing traffic to dashinformer.com as we both will attend SXSW.

All future updates will be posted on this thread:

Summary: We propose that DASH promote itself through targeted sponsorships, marketing campaigns, a two page magazine spread, and through brand advocates at South by Southwest 2018 (SXSW 2018). SXSW is an internationally recognized and attended technology and interactive conference scheduled March 9-18, 2018 in Austin, Texas.

Our proposal is simple. We want to represent and spread the word about DASHin the best way possible at the internationally known technology conference South by Southwest (SXSW) in Austin, Texas this March. Being from Austin, we have seen the tremendous influence SXSW has provided to scores of companies and industries. Some notable companies that launched at SXSW are: Twitter, GroupMe, and Foursquare.

SXSW is a great fit for DASH. We know that sponsoring events and providing people with information about DASH in an exciting and influential gathering will help spread its adoption, increase its market capitalization, and generate awareness.

SXSW is an international technology conference in Austin, Texas that attracts hundreds of thousands of attendees each year. Specifically, the technology tracks relevant to DASH will attract over 75,000 attendees this year. SXSW has proven through the years to be a breeding ground for entrepreneurs, innovators, and thought leaders.

South By Southwest dedicates itself to helping creative people achieve their goals. Founded in 1987 in Austin, Texas, SXSW is best known for its conference and festivals that celebrate the convergence of the interactive, film, and music industries. The event, an essential destination for global professionals, features sessions, showcases, screenings, exhibitions, and a variety of networking opportunities. SXSW proves that the most unexpected discoveries happen when diverse topics and people come together.

Here is a video SXSW produced about the conference:
https://youtu.be/2OQZfjHn6m8

Here are the SXSW 2017 Demographics: 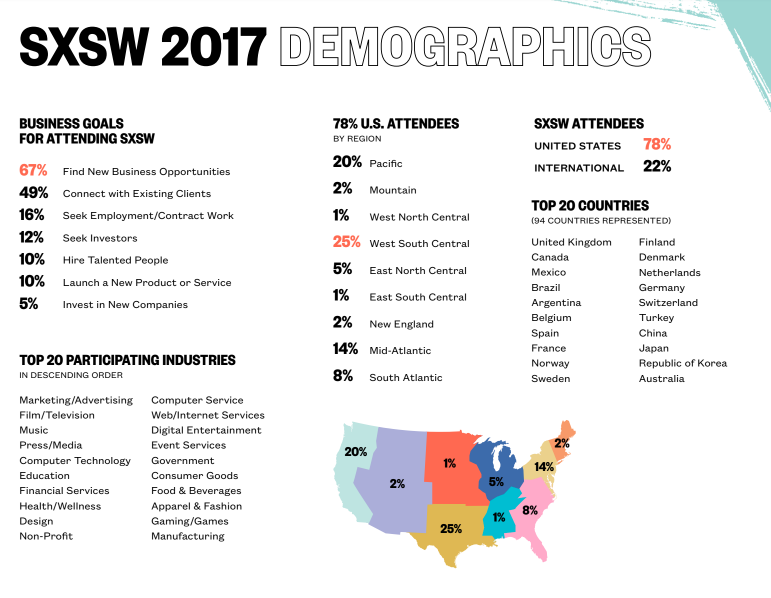 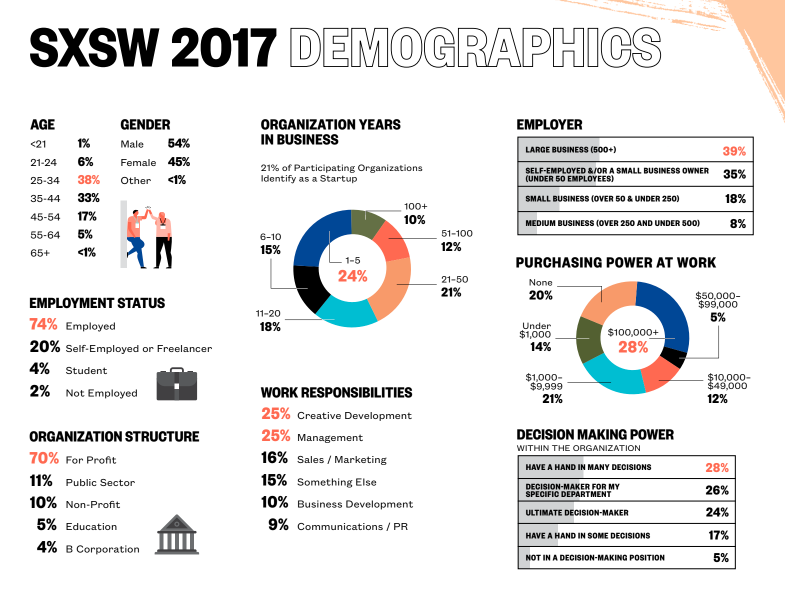 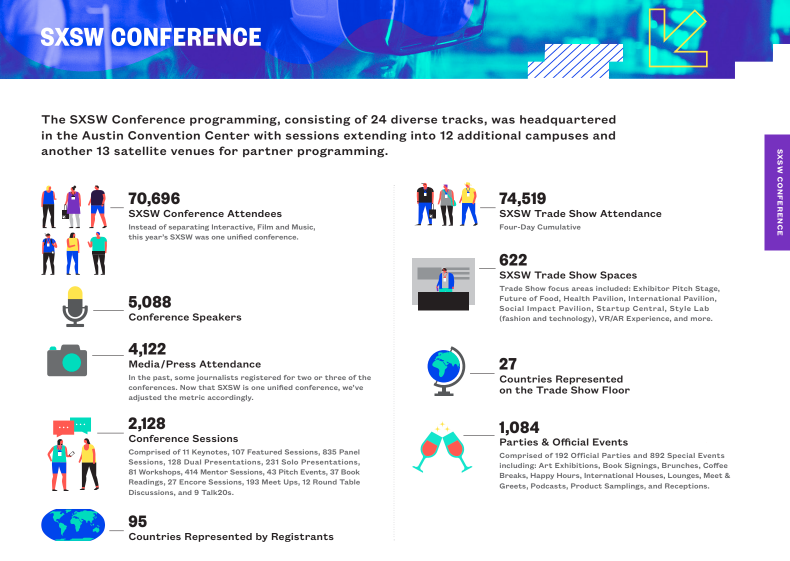 *All of the above images are property of SXSW.

Why is this good for DASH?

SXSW is an amazing opportunity for DASH to be in front of thousands of influencers, creative minds, developers, and innovators. Our proposal is more than just a sponsorship. We aim to attend all of the relevant events, tracks, hackathons, breakout sessions, and networking events to spread the word and printed material about the benefits of DASH and the problems it solves.

We have our team of designers and developers with over 30 years of combined experience ready to make all the necessary graphics, brochures, promotional materials, and any other required assets that will help promote DASH at SXSW.

We have already been working directly with SXSW and have put the
following package together:

TLDR: Promote and position DASH as a major player in the erupting cryptocurrency space to a highly successful and intelligent group of innovators and influencers.

SXSW Accelerator is a cutting-edge, competitive showcase for entrepreneurs to present their new technologies before a panel of industry experts, early adopters and representatives from the venture capital community. The event occurs as part of the SXSW Conference, an explosion of geek culture bringing together the world’s most creative web developers, designers, analysts, innovators, content producers, programmers and new media entrepreneurs.

Increase awareness of your SXSW event or integration with boosted social media posts through SXSW Facebook and Twitter channels. SXSW Social Media Amplification packages include a paid, boosted Facebook post and a paid, promoted Tweet. Packages can also include Facebook Live and cover things like live performances*, interviews, or activations. All Amplification packages require approval by SXSW. Industry leaders follow SXSW social media platforms leading up to, during, and after SXSW. This allows for broad and effective communication to your target demographics, event promotion, and boosting your brand affinity.

The specific package we are proposing will include both boosted Facebook post and a Promoted Tweet. It will also include a Facebook Live that we will produce based upon the feedback and questions we get from people about DASH. 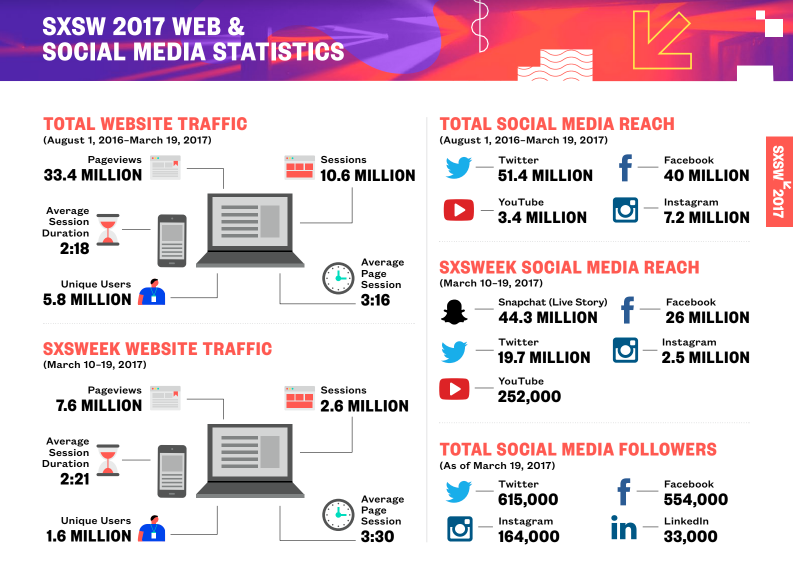 We know this proposal requires a quick timeline. Our experienced local team is standing by and ready to make this run as smoothly as possible. Please let us know what questions you may have.

We are two brothers and crypto advocates who believe DASH is the future of payments. We have hands-on experience advocating and presenting at SXSW with our own tech start-up before it was acquired by an industry leader. Here is a short summary of who we are:

EJ Archuleta is a graduate of Texas Tech University with a BA in economics. He is a licensed attorney, a software developer, and a crypto enthusiast. He taught himself to code because he has a passion for software and tech. He first started using cryptocurrencies in 2013 when a friend sent him some bitcoin to check out. He enjoys sailing and spending time with his dog. EJ is from Austin, Texas.

Austin Archuleta is a graduate of the University of Texas at Austin with a degree in civil engineering. He is a software developer and crypto enthusiast. Austin has always had a passion for software and technology and is very involved in the crypto trading space. He first started using cryptocurrencies in 2014 because he saw that blockchain technology could solve many engineering problems. He enjoys playing soccer and walking his dog. Austin is from Austin, Texas.

Our planned SXSW team will include the two brothers mentioned above and an additional four highly motivated crypto enthusiasts, technologists, and strategists.

In 2013, Austin and EJ Archuleta started a software company called Scanther. As a startup, Scanther developed a broad range of products and was primarily positioned as a B2B SaaS solution for small business technology.

Scanther started out building “Smart Signs” that paired with a mobile website builder. This product attracted the attention of a Fortune 500 company with whom we eventually partnered. The Scanther Smart Sign system was featured on Mad Money on CNBC along with our partner.

As the business evolved so did our products. Eventually our system evolved into a mobile app builder. Our unique selling point was that our apps could be created in less than a minute using only a business name and we could create both Apple and Android apps at scale. This system attracted the attention of a few potential buyers and in 2016 Scanther was acquired by Advice Interactive Group of Dallas, Texas.

Here is a link about the acquisition:
http://www.512tech.com/technology/austin-based-scanther-mobile-acquired-dallas-digital-marketing-agency/TaP4gd0hozxmB3zBr5aRYP/

Along the way, we participated in the SXSW trade show and advocated for Scanther with great results at SXSW 2014 &amp; 2015. In 2016 we attended the conference as well. We are experienced at SXSW and know the right places to lay groundwork based upon our previous work and connections at the conference.

Our family loves technology and are avid DASH enthusiasts. We believe in the self governance and self funding model. We love the quick and effortless payments that protect the user’s privacy. Because of these reasons we educated and persuaded family members to invest in DASH in early 2017. As a result, most of our family members are DASH investors. Our goals are to spread the word about DASH, foster adoption, and ultimately increase its market capitalization through education and participation.

Thank you in advance for your time.
Show full description ...

Submit comment
Criticalinput -3 points,5 years ago
No fan of Melinda Gates. That is for sure. Globalist agendas are going to screw humanity hard in the coming century for sure.
No fan of Sadiq Khan either. Londonistan's acid attacks, terrorist events and reported huge rises in knife crimes are happening. Surreal.
Steve Huffman of Reddit targets Trump supporters. Huffman is surely a Globalist supporting shill too. One centralised govt for the world!!! Great

So do I support this proposal? Reading those names was depressing. I will abstain.

Reply
viamontelane 3 points,5 years ago
It will be a big missed opportunity if Dash does not have a presence at South by Southwest this year. SXSW is one of the top tech conferences. Voted YES on this. Well done proposal. As MNOs we have to be able to see the difference between proposals that are important for Dash, like this one, and ones that are not.
Reply
boxer -1 point,5 years ago
Hey Mr. Cryptobadger! Please, make a video talking about DASH and more details of your proposal. Do you have social media profiles?
Reply
viamontelane 2 points,5 years ago
@tuapoma - it is abusive for you to go to a number of the proposals (see same nearly word for word request for a video of the tax attorney proposal) and request them to do a video and try and get their social media profiles. Most proposal owners work hard on their proposals and don't need your silly demands.
Reply
boxer 0 points,5 years ago
mr. viamontelane, you do not have to be offended because the act itself is not offensive
Reply
bchamz 3 points,5 years ago
Very cool-my sister and I were talking the other day about how perfect of a match SXSW and Dash Digital Cash would be! Good proposal!
Reply
Cryptobadger (proposal owner) 1 point,5 years ago
Thank you!
Reply
blockchaintech -1 point,5 years ago
I think your proposal is very interesting.

You could extend us if you have any plan to take advantage of the event and try to contact and present Dash to some VIP people that will attend such as:
Melinda Gates, Mark Cuban, Michael Dell (Founder of Dell Computers), Peter Thiel.

I think Michael Dell, it would be very important to contact him because if Dell accepted Dash as a method of payment, it would be great news.

He could go through the event and make a report to see if he could contact VIPs.

Please, comment us about these suggestions that I make to you, since the sponsorships in events have a very specific purpose, to try to make commercial agreements.

Thank you for your proposal.
Reply
Cryptobadger (proposal owner) 2 points,5 years ago
Great idea, we’re going to try our best to connect with as many people as possible including the keynote speakers.
Reply
stillcantstop 2 points,5 years ago
This demographic is a great fit for Dash. Nice breakdown on the budget. Reasonable price for what we are getting. Good plan to attack next year's event even earlier so we can get Ryan a speaking slot. Voting yes.

Thanks for your question!
Reply
Cryptobadger (proposal owner) 1 point,5 years ago
It is in the body of the proposal, I will adjust the proposal it so it is higher up but here is the relevant part:

Thanks for your question!

Adjusted the line items***
Reply
Cryptobadger (proposal owner) 1 point,5 years ago
Again sorry for the bad formatting. Having an issue with the text input box. Switched browsers, now having a better experience.

Promotional Materials (shirts, hats, brochures, and some type of giveaway item to pass out for 6 people) - 1.5 DASH