Last month Andy Freer transferred the role of Dash Incubator proposal owner to me (Rion Gull), as explained on both Dash Central and Reddit.  As a reminder, the proposal owner (PO) role is detailed in the PO service bounty’s specification document. I assumed the role on July 22nd and Andy has transferred ownership of all relevant assets (Trello board, Google sheet, Incubator funds, etc) to my care.

This proposal continues the ongoing funding request as outlined in the PO spec, with one small deviation from normal: this proposal only asks for 2 months of funding, primarily to better align funding requests with calendar quarters; 3-month proposals will resume next cycle (if proposals are approved).  We are requesting 500 DASH/month, rationale given in later sections.

Nothing changes with respect to the Incubator’s mission, vision, strategy, operations, or rules in this proposal.  In addition, we will continue operating with the same focus and roadmap as outlined in our Q2 proposal.  I will, however, add some additional thoughts in later sections regarding my personal involvement with Incubator, and potential changes after this 2-month period.

﻿Since our last proposal (2021 Q2) the Incubator has added another 21 members to our Trello board, from 104 to 125 (an increase of ~20% in 3 months).  Developer rewards have also increased, as shown in Figure 1, which presents the total rewards paid for each month of Incubator’s existence.  In addition to rewards paid, Figure 1 also shows our Q1 reward rate (268 DASH/month), our Q2 reward rate (451 DASH/month), and finally our current funding request (500 DASH/month). 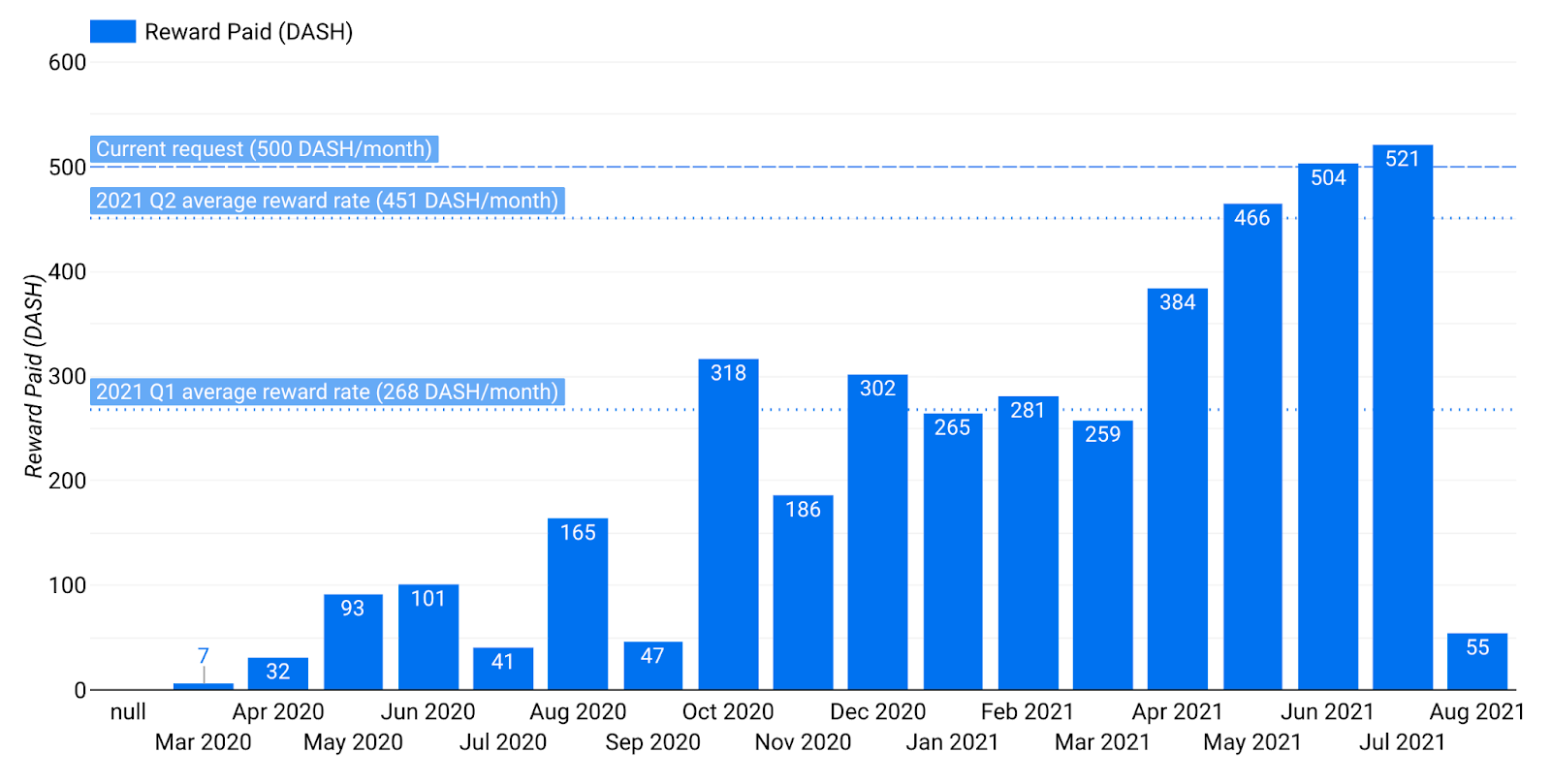 The incubator paid out 1,355 DASH in Q2, with a significant share directed at the priorities listed in the Q2 proposal, summarized in Section 3.1 below.  The DashPay program was our top priority and also our top rewarded bounty in Q2.

Although tempered by challenges with Platform, we made progress on both the DashPay Program and our Core dApp program.  Because of the Platform issues, we shifted some focus to helping DCG with Platform QA and overall support to help bring it to mainnet as soon as possible.  I’m in communication with DCG’s developers regarding our overall strategy for working together on this and other areas. 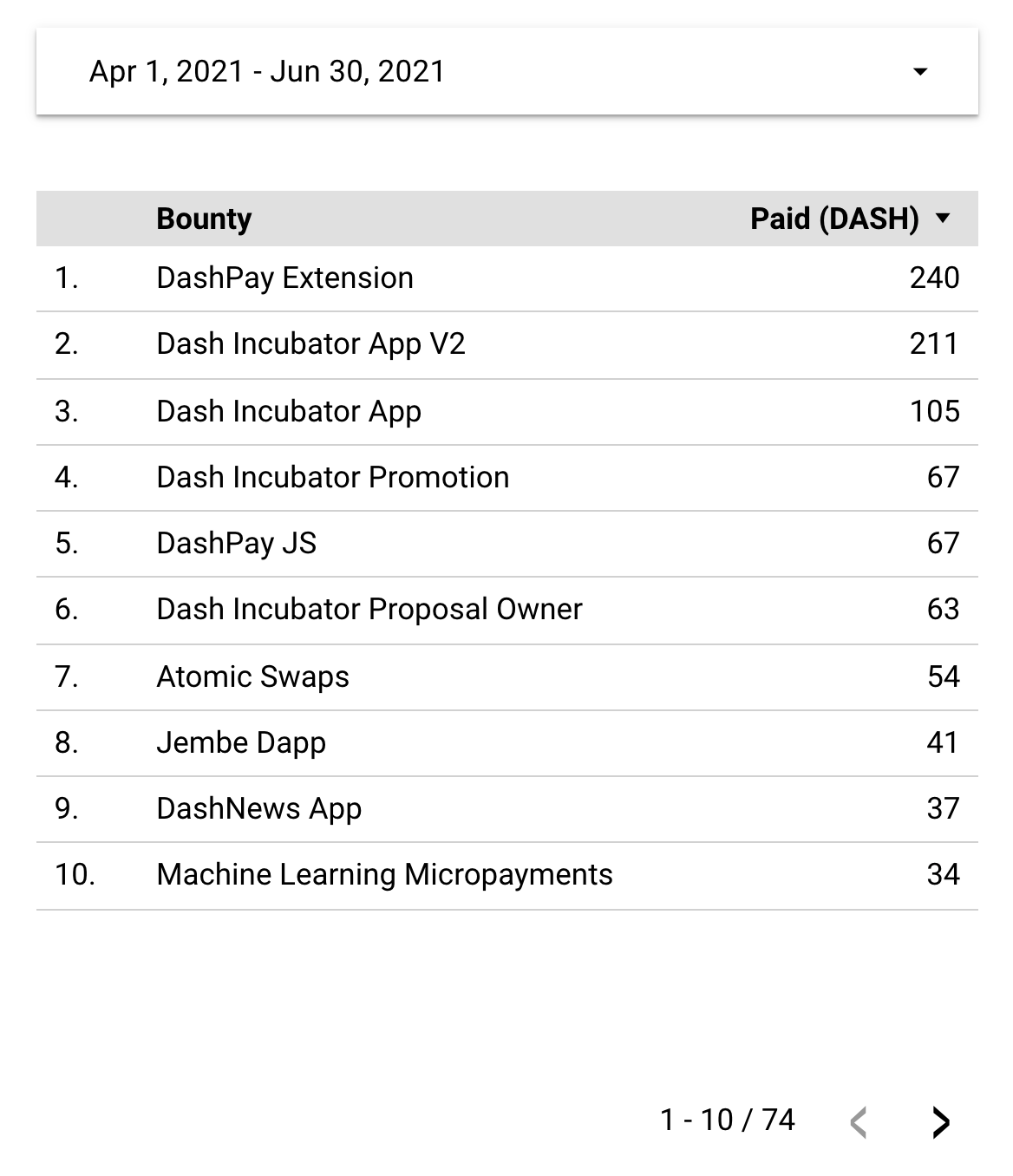 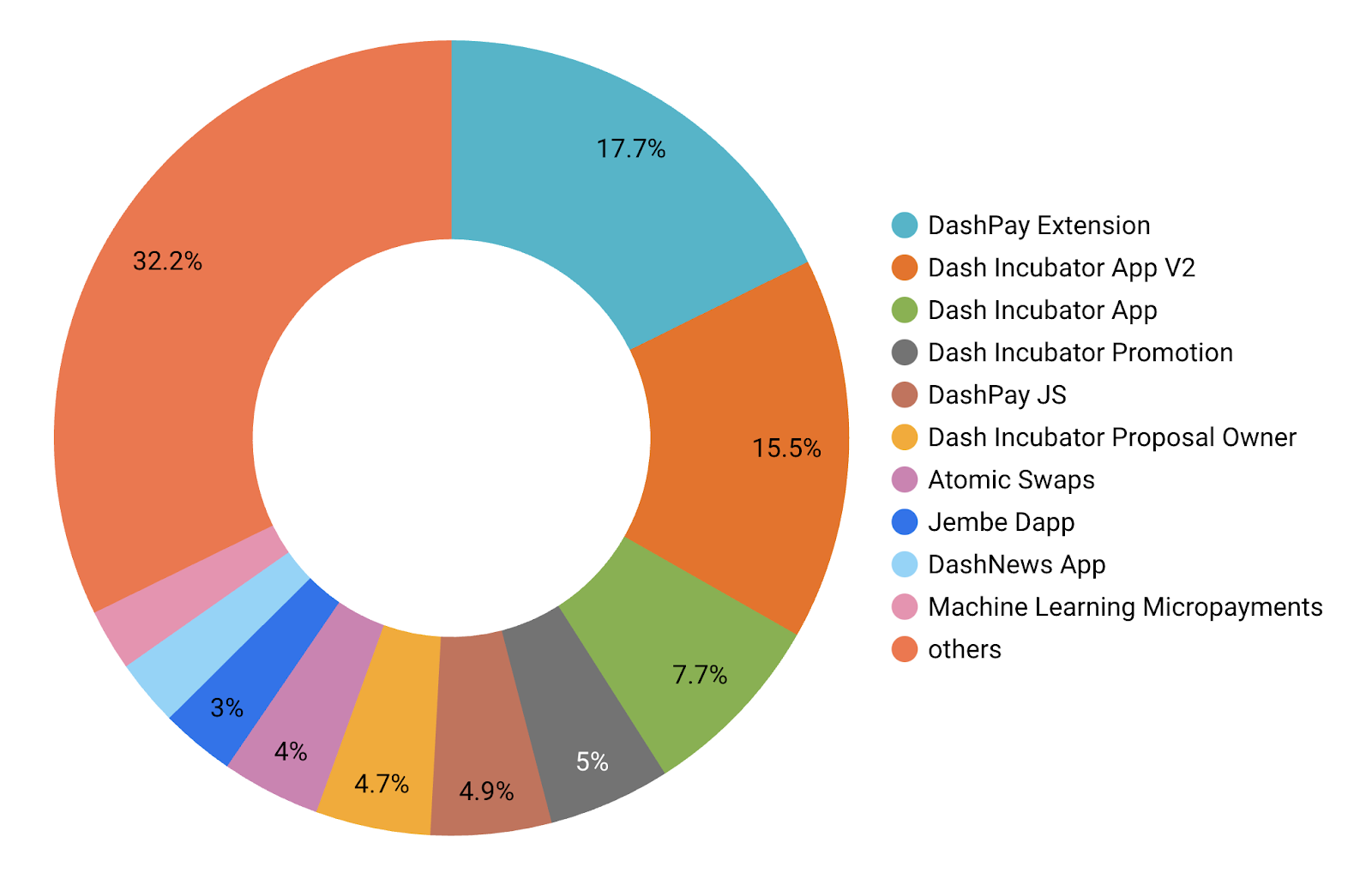 
As mentioned above, this proposal assumes roughly the same priorities for two more months.  This will give me time to review their status and direct the appropriate resources to deliver meaningful results.  After these 2 months I will report on accomplishments and proceed with new priorities as appropriate.

In addition to the items above, we also plan to launch two new Dash-funded organizations (DFOs) that we are incubating in our DFO Kickstarter bounty: the Dash Protocol Incentive Fund DFO and the Dash Trust Protector DFO.  These are coming on the heels of the successful launch of the Dash Marketing Hub DFO lead and proposed by Joel Valenzuela.  We support this DFO as it will allow us to offload several of our former promotion-related bounties and it will bring Incubator applications to the attention of a broader audience than we alone could achieve.

This is a 2-month proposal to start aligning with calendar quarters.  This will get us on a clear and memorable cadence for both proposal submissions and eventual application releases and demos.  One of my goals with the Incubator is to have a clearer picture of what everyone is working on so that the broader Dash community and masternode owners can judge the value of what we’re funding.  Right now there’s clearly a lot of activity, but it’s less clear what we’ve accomplished.  I think having regular software/app release dates that align with both the proposal cycle and the calendar year will be helpful to that end.

After this proposal, our next one will be submitted in the first week of October, which is the first week of Q4.  After that, the first week in January, April, July, and October.  Developers can then use this same schedule to plan their releases and demos in preparation for each upcoming proposal.  Table 1 below shows the Incubator’s historical, current, and planned proposal submissions.

﻿We are requesting 500 DASH/month for 2 months.

As mentioned in previous proposals, we feel that Dash would benefit from ongoing community development funding of at least 10-20% of Dash’s budget.  The incubator has steadily grown in scale to approach that level, as shown in Table 2 below.  Our current request is 10.1% of Dash’s 4,945 DASH budget.

﻿﻿All operations of the Incubator funded by this proposal are subject to our current Rules.  This proposal forms a part of our Network Contract with Dash.

﻿Links needed to access all Incubator information, including past Proposals, can be found in the Resources section of our Rules.

I want to thank Andy for his mentorship over the past 13 months of my involvement with the Incubator.  Through our many conversations I’ve caught his vision for the Incubator and I plan to carry that with me throughout my time as proposal owner, which I consider both an opportunity and a great responsibility.  I have many ideas that I hope to bring to the Incubator.  Thanks to all you masternode owners who continue your support beyond Andy’s leadership.

DarrenT 4 points,9 months ago
I'm voting yes on this proposal.
Reply
rion (proposal owner) 1 point,9 months ago
Thanks, Darren. Much appreciated.
Reply
quantumexplorer 5 points,9 months ago
This proposal has my full support. The incubator is supporting both external contributors for Core as bounties as well as certain side projects that are quite important and will greatly help us in the future. As an example one of these is a distributed image thumbnail server. This project will be able to run on many nodes (or even potentially some masternodes) and eventually service the network with a content delivery network for thumbnails for user avatars in DashPay. Another one is a merchant directory on top of platform. And these are just a few of tens of ideas being funded by incubator at the moment.
Reply
rion (proposal owner) 1 point,9 months ago
Appreciate the support. I think there’s a great symbiotic relationship possible between DCG and Incubator.
Reply
agnewpickens 1 point,9 months ago
That is a rather large ask, DC seems to have gone wonky, can't even tell how much of the budget is already allocated, could this price out DCG comp package? I am not fully satisfied with DCG's performance, but hard to make a decision when Dash Central isn't even showing the network available budget. <clusterfuck> Especially with a DTP government proposal up. I am going to hold back my votes on everything until I get some clarity.
Reply
agnewpickens 0 points,9 months ago
Yes
Reply
rion (proposal owner) 1 point,9 months ago
Looks like the DIF put in their proposal now. Room for everyone including them.
Reply
qwizzie 2 points,9 months ago
With regards to DC : rango is working on fixing the bugs (missing mn payments, budget proposals hanging in yellow), he replied 2 days ago in the shoutbox of DC. I assume that will also fix the budget allocation. Too bad that Dash Nexus is down, or you could have checked it there.
Reply
qwizzie 2 points,9 months ago
There are two more places where you can check the budget allocation :