Repositories pertaining to dAPI and Drive have been open-sourced by Dash Core. View Github Link﻿ I Read Release Announcement

#BuildWithDash - New Blockchain Developers for Dash I Developer Marketing, Awareness and Support I Integrations with New and Upcoming D-Apps I Cannabis, Gaming, Payroll, Betting, Remittances and Travel I  Attracting top developers in the run up to Evolution

#BuildWithDash is a Global Developer Marketing and Awareness campaign targeted at promoting Dash to Independent Developers and increasing the number of Integrations worldwide. Our aim is to build a developer community on the lines of iOS and Android, where decentralised development teams drive the ecosystem forward through their ideas and innovation.

Dash activates 1000's of wallets every month. However, without real use cases, new users don't know what to do with their Dash. As a result, new users become inactive right after signing up. For real growth to happen, users need to be able to utilise Dash for daily applications.

Independent Blockchain Developers are the critical link to success in this ecosystem. Since the treasury has limited resources to develop its own apps or bankroll businesses, it is important to partner with hundreds of independent developers and scale Dash transactions through them.

Transactions on the network scale with the number of usable apps  and the only practical way to increase them is to integrate with a large variety of public applications.

With the markets becoming resurgent again, there is a strong uptick in developer activity. #BuildwithDash seeks to raise awareness amongst independent developers through High Quality Content, Targeted PR and Personalised  Outreach. We also aim to provide developers with community driven support and facilitate access to early adopters by showcasing their projects in the Dash Community.

Our initial focus will be to target Developers working on digital payment centric applications like Cannabis, Gaming, Payroll, Sports Betting, Remittances and Travel.

This campaign would have the following salient features and deliverables :

#BuildWithDash Campaign will focus on Developers working on practical daily use cases like Social Networking, Gaming, Betting, Payroll, Digital Goods and Remittances. We are in the process of drawing up a list of development teams / businesses working on these areas.

Benefits for the Dash Community

Our previous project with the Dash community focused on researching the freelancing industry and creating an educational course and marketing it to Freelancers was approved in November 2017. As part of that project we:

Some important numbers from our campaign:

We presented detailed and regular reporting to the community - View all project updates. 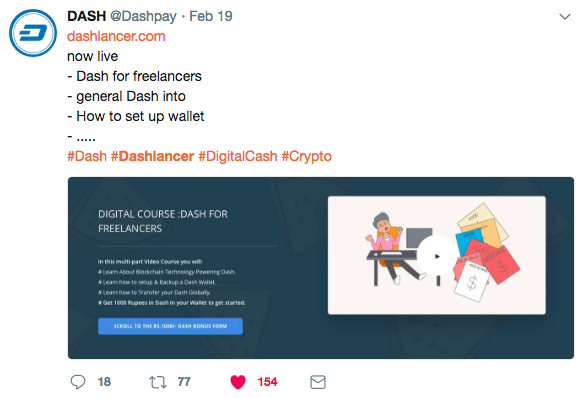 He has led marketing for consumer internet businesses like Labster (VR Education, Raised $20Million) and Bridallive.Com (SAAS for Bridalshops, Acquired By Fullsteam).He has a background in the online talent industry and has led marketing for the Netherlands based Squads.Com, a popular online platform to match teams of top developers with employers.

Learn more about my work --&gt; My Linkedin Profile

Look forward to hearing from you!

In case you would like to contribute to this effort, please feel free to reach out to me on Discord. Gaurav #5952

Q: How do you place Dash Evolution in your plans to scale the Developer Community?

We see building the developer community as a continuous process and the most critical part of the ecosystem. Waiting for evolution to promote integrations might see us fall behind in the race for developer talent and delay the network effects of early adoption.

Our plan factors in the launch of Evolution as a step forward and we have planned additional promotions in the lead up to it. We seek to ease developers into different protocol updates and test-nets (as and when available) by engaging with them and giving them timely information, support and resources.

Most apps will be able to integrate with Dash as is. As markets rebound and the first wave of usable applications start hitting the market, we believe it is important for Dash to remain at the forefront of all consumer facing adoption through the widest range of integrations possible.

Q: Are you planning on targeting brick and mortar stores?

A: No, We are laser focused on integrations with digital payment centric applications like Gaming, Remittances, Global Payroll, Purchase of Digital Goods and Sports Betting. We see them as highly scalable and low hanging fruits when it comes to adoption.

A: Without use cases, consumers don't really know what to do with their Dash. This is one probable reason why wallet activation campaigns can be ineffective. By raising developer awareness, we seek to create a basic set of use cases through them and demonstrate the real value of Dash to new users.
Show full description ...

The platform is also nearly ready and the campaign formally launches in the second week of July.

Stay tuned in for more updates!

The BuildWithDash Campaign kicks off via integration planning with a Gaming Dapp Development Studio for in-dApp purchases for their range of MMO games.

Blockchain Gaming is going to be a massive use-case for Dash in the future and we are excited to be pursuing this opportunity amongst others.

Thank you for all the support and comments on our proposal.

With the release of dAPI and Dash Drive Repositories, we are excited about our campaign to grow the developer community.

We ended up short of some votes for April; We hope you would support us for the current May Cycle.

Best regards,
Gaurav Gupta
#BuildWithDash
Reply
stillcantstop 1 point,8 months ago
All your votes from last month are cancelled, null and void. Unlike previous months where successful proposals can kind of coast because all their YES vote carry over, this month, THEY DON'T. Please go vote so that we don't leave deserving proposals high and dry. If you are having problems voting, this thread will likely solve your problem, otherwise ask.

Thank you so much! We see digital services and payroll as one of the many important practical use cases for Dash. We hope to the leverage the independent developer community to offer this solution, amongst others.

Since the original proposal was for dash lancer and freelancer community

Gauruv has modified his proposal tittles inter alia, to make his proposal more appealing to MNO by stating he will now focus on integerations etc.

What concerns me the most is the operating country (india) has considered Cannabis Illegal and has no future plans.

Furthmore some of the betting operations are also restricted

Be very Wary guys, we are once again being shovelled hopium

Fwiw his last proposal barely delivered for the record

Voting NO
Reply
Arthyron 8 points,8 months ago
@Realmrhack - Once again you chime in without even bothering to understand the proposal. Do you ever read them, MrHack, or just look for reasons to denigrate every single proposal? His first proposal delivered exactly what he set out to. He could not complete the platform because his last proposal went unfunded.

The things specifically mentioned in the title are things that he and his team have identified as prime subjects for dapps (largely based on the key markets identified by DCG and discussions with MNOs like myself). You don't have to be in a Cannabis-legal area to develop dapps to that end. Regardless, this is about the creation of materials and outreach to dapp developers, not the creation of dapps and integrations. This is about getting the ball rolling on marketing to developers that Dash is now a dapp platform, and one unlike any other.

I'm getting tired of not only having to review proposals, but having to debunk nay-sayers who don't do their jobs but freely throw around accusations and FUD off the top of their heads.

Just to clarify, These are two entirely different projects you are referring to.

Our previous proposal was focused on Freelancing (Nov-Dec 2017); This project targets building up an independent developer community to increase real world applications.

Our goal has always been focused on facilitating genuine use-case building for Dash.

We have a distributed team and a global focus; none of our integrations is intended to be based on any specific region.

Regards,
Gaurav
Reply
Ariana -4 points,8 months ago
This proposal doesn't convince me.
Reply
Arthyron 4 points,9 months ago
I was an avid supporter of Gaurav's DashLancer campaign before it went unnoticed and unfunded for no apparent reason. Gaurav demonstrated that he and his team were capable of delivering on their goals with the allotted resources, and did a great job of staying on top of reporting. It's unfortunate that the network did not seek to continue funding his platform.

That being said, there have not been many concrete plans laid for what will be one of the most pivotal releases in Dash history--at least not many that have been publicly discussed. Given this fact, I think we really need to start now to get out ahead of the release of Evolution so that we already have developers chomping at the bit so we don't start out behind. Who better than a tried and tested developer to lead the pursuit of seeking out further developer talent?

Gaurav, are you and your team planning to produce the content yourselves or will you be outsourcing it to a design studio of some sort?
Reply
GauravGupta (proposal owner) 3 points,9 months ago
Thank you so much for your support, Arthyron!

Yes, we seek to establish basic use cases for Dash by attracting independent development talent into the Dash community. Integration with Apps on Gaming, Remittances, Payroll and Betting, Travel can be a force multiplier for the ecosystem and ensure new users are able to gainfully utilize their Dash instead of becoming inactive right on signup.

We see building the developer community as a continuous process and the most critical part of the ecosystem. Waiting for evolution to promote integrations might see us fall behind in the race for independent developer talent and delay the network effects of early adoption.

Our plan factors in the launch of Evolution as a step forward and we have planned additional promotions in the lead up to it. We seek to ease developers into different protocol updates and test-nets (as and when available) by engaging with them and giving them timely information, support and resources.

Most apps will be able to integrate Dash and offer it as a payment option. As the first wave of usable applications start hitting the market, we believe it is important for Dash to maintain a strong presence at the forefront of all consumer facing adoption through the widest range of integrations possible.
Reply
Realmrhack -3 points,9 months ago
@gauruvgupta

166 dash was spent on the previous proposal!
Reply
A_node_to_a_Master 4 points,8 months ago
Again good question, but please can you ask more polite. I wanne be on yourside, on most of what you're asking but you're being ***hole about. Don't do it for me or yourself do it for the network because you'll get better answers.
Reply
Realmrhack 0 points,8 months ago
Im sure your right it could be asked with better choice of language but it should not let you detract from the main point
Reply
GauravGupta (proposal owner) 5 points,9 months ago
@Realmrhack

The project ran from November 2017- Feb 2018. The course was hosted on the Dashlancer website where users could sign up with their Email Ids to learn more about Dash.

We have shared extensive screenshots from a part of our marketing campaign on this link : https://bit.ly/2V6AvBO. Some specific ones :

More information may be available with Dashwatch, which we constantly updated at the time.

When we were unable to carry on and build out a dash services platform, the team working on it had to be disbanded and the platform was discontinued at the end of the year.

However, the course can still be viewed here on the old Youtube Channel : https://www.youtube.com/channel/UCeVQi20hLE7ahFfC_BrSoeg?view_as=subscriber

We had previous proposal based on the Online Services Economy towards the end of 2017.