Dash Airline Campaign Proposal
Dash should soon become the Market Cap leader but Dash is lacking some marketing resources to help make this happen.  My team is proposing an airline advertising campaign that will reach millions of people with exceptional demographics in hope of spreading the word about Dash around the world.

Objective: We propose running a 90 second video infomercial on American and Virgin America airlines. The American Airlines Ad will run for a 1-month period, and the Virgin America Ad will run for a two-month period, reaching millions of people.  These segments will run on the video screens located on the aircraft seat backs. Most commercials will air twice per flight on average. 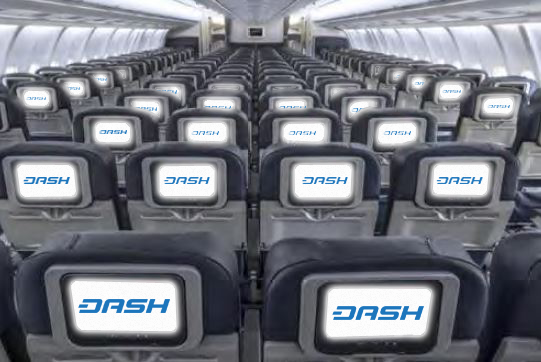 The video is titled “What is Dash” and has been edited to remove 11 seconds to meet the airlines standards and time allocation. We believe that this video is the best one available to introduce people to Dash.
The video is located here https://www.dropbox.com/s/et93gz1f7kcugwe/DashEdit1%283%29.mp4?dl=0

Cost:
The cost is 171 Dash (Equivalent to $27,947 USD).
Due to the recent volatility of the market we added an additional 10 Dash to ensure that we can run both Ads if the market takes another downward swing (The 10 Dash is included in the 171 Dash total).
We also request 5 Dash for reimbursement of the proposal fee (The 5 Dash is included in 171 Dash Total).

Why is airline advertising effective?
In a fast-changing digital world, it is becoming increasingly difficult to reach consumers on the go.  In-flight video programming is one last remaining ways to effectively reach millions of passengers in a captive, controlled environment. With in-flight programming; we can reach an emotional connection with an exceptional demographic, through an engaging video feature.
People pay attention to a good story with captivating visuals. Frequent flyers are successful professionals with sophisticated tastes and the income to pursue their interests. In-flight media programming places traditional advertising in front of these elusive consumers at a time when they are not distracted by the internet, cell phones or on-demand devices.

Some more facts:
Price and customer demographics and statistics

Duration:
The American airlines program reaches our target audience for 30 consecutive days, in a captive and receptive environment, potentially reaching 955,000 people of which 100,000 are business or First-class passengers.

Duration:
The Virgin America program reaches potentially 1.3 Million people on over 10,000 flights, during 60 consecutive days, in a very captive and receptive environment.

Placement:
Seatback video on all flights

Why is In-flight media preferred over TV?A national TV commercial in 2011 cost about $345,000 in production costs alone.  The cost to run the ad in a popular nationally televised
program during 2011 was more than $100,000.

Summary
This infomercial will reach typically affluent and well-educated people, who for one reason or another, are trapped on an airline for several hours.  Let’s take advantage of this fact.
We can reach a captive audience of almost 2.25 million people for a grand total of 171 Dash.
We believe this campaign will educate people about Dash and those people will spread the word around the world for a fraction of the cost of a typical TV advertisement.

Our Team
Our team consists of a computer professional with over ten years’ experience, and two retirees that have over Forty years of experience in special event management and marketing. We also have over 50 years’ experience working with contracts with State and Federal governments.
We have several other unique proposals in work now and we would appreciate your support of this proposal so that we may move forward
with more exciting ones.
Let’s make some money for the entire Dash community!

Is this the entire disclosure regarding due diligence?
3 annonomus people?

Reply
metasync 2 points,5 years ago
Actually we do name ourselves in the notes section of the proposal posted at Dash Treasury(Added here soon, sorry). There were also many other inquires via the Dash.org forums that we answered over there. We are happy to answer any questions that may not have been covered there.

https://www.dash.org/forum/threads/pre-proposal-airline-in-flight-media-campaign.15779/
Reply
Mastermined 5 points,5 years ago
If you want to get my votes you need to copy and paste the proposal info here on Dash Central as this is where I vote and mostly communicate from.
Reply
digay -4 points,5 years ago
copy and paste your buttcheeks shut with glue, mastergayed.
Reply
Doewapapus (proposal owner) 4 points,5 years ago
Sorry for the delay I am working to claim the proposal so I can post it to this forum. The proposal was submitted using the Dash Treasury and was automatically posted here.
Reply
Doewapapus (proposal owner) 1 point,5 years ago
Sorry for the delay in posting the proposal.
Reply
narroway 1 point,5 years ago
Apparently there must be a logical reason why there is such a staunch loyalty to Dash Central that I am not aware of. Please share. However when I asked on various occasions to have the Bitcuners proposal removed since it was 3 months expired I was well reminded that Dash Central is Rango's baby and is not a Core entity nor is it an official Dash website. I would hate to see super solid and intelligent proposals not get funded because of a feudal loyalty type thing. We desperately need better quality proposals to succeed as a coin project. This is one. Follow the link or explain why not.
Reply
Mastermined 2 points,5 years ago
This is where i come to check my masternode payments and vote from. It offers a lot of features other sites don't like being able to vote with all my mn's with a push of a button and to be able to get emails when they are paid or have an issues and go down.

DC has it's issues though, like not being for masternode owners exclusively which allows trolls to run wild as they have been and continue to do. If a new site comes along that does everything DC does and fixes other issues i have brought up then i would consider switching.
Rango is also a long time community member who operates on donations, so there is some staunch loyalty too.
Reply
IronVape -2 points,5 years ago
This is Rango's site. And a person is posting here looking for votes. And that person does not want to explain his proposal to the people who are on this site. OK, so be it. Good luck.
Reply
Doewapapus (proposal owner) 3 points,5 years ago
This proposal was automatically posted here. We are looking to claim ownership of this proposal and will edit it to include the full details as soon as possible. The proposal was created through Dash Treasury and we do not yet have the private key to sign and claim this as our own.
Reply
dashdisciple 1 point,5 years ago
The proposal owner is looking for votes, and the MNOs are looking for proposal owners. Narroway makes sense.
Reply
dashdisciple 1 point,5 years ago
The blockchain very conveniently stores the URL address for external information, which in this case is www.dashtreasury.org/p-2969.prop. If you follow that link with a single click, you can see the full proposal. It's not hard.